The Internet of Things is Driving our Future

We live in an age of hyper-connectedness. Specific-function devices are now able to relay information to networks in real-time with ease. To put it simply, we live among the Internet of Things (IoT). In this article, we will dive into what IoT is, where it is headed, and what that means for consumers and businesses in the future. Let’s get started!

What the heck is the Internet of Things?

It used to be that computers, and later (mobile) phones, were the only things connected to the internet. As you know, that is no longer the case. The Internet is becoming increasingly accessible, and the cost of obtaining internet access is rapidly declining. Now companies are creating devices that have Wi-Fi capabilities on top of core functions. Thermostats, street cameras, factory sensors, TVs, coffee machines… and even humans are examples of things that can communicate with other “things” over a network. This concept is not driven purely by consumerism, though. This concept seeks to change life as we know it. To truly understand the meaning of the Internet of Things (IoT) you must look at what is in the name. For this, we refer to the origins of IoT.

The Internet of Things According to Peter T. Lewis

Over 30 years ago Peter T. Lewis, an established professional in the telecommunications space, coined and defined the term “Internet of Things” in a speech to the Congressional Black Caucus Foundation. At a time where the internet was an underachieving, yet exciting area of work, Mr. Lewis had a firm grip on the concept of IoT:

The Internet of Things, or IoT, is the integration of people, processes and technology with connectable devices and sensors to enable remote monitoring, status, manipulation and evaluation of trends of such devices.

His definition is particularly interesting to read today as the modern definition is rather generalized and diluted. I say this because the Internet of Things is more than a network of “devices”. To truly understand IoT, one must note that a “thing” can be a person, process, hardware/software, etc. that is connected by means of a network to further additional action by responsible parties or other dependent things. A IoT network can even be composed of many systems of things that connect to one large infrastructure. An example of this can be found in public transportation systems. You may not think about it, but in reality there is a lot that leads up to the travel options you receive on Google Maps. I will break it down for you in 7 simple steps: 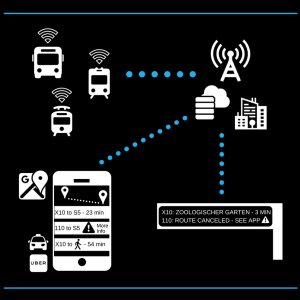 In a nutshell, IoT is all about making society run more efficiently. With multiple data points from related things, a human or machine can more effectively operate. This can certainly apply to public transportation, but also in many other scenarios like operations management, private home security, or automated household appliances. Opportunity for IoT is is vast and seemingly endless. For an even better explanation of the Internet of Things, I suggest watching this video from IBM.

The Fundamental Cause for IoT Explosion

Realizing the potential for connectivity among “things” is important, but the core reason for these technological advances really comes down to one thing: the technology related to the Internet of Things has become more, more affordable. It is so much easier to implement technological change across a society when more people can obtain the necessary materials. Transistors and sensors are two of the biggest players in the growth of IoT. Adding affordability on top of increasing processing power and network reliability creates a perfect storm for the growing market. The addition of IoT functionality to an abundance of things has opened up a new world for humanity at a price businesses love. Now that is what they call a win-win! 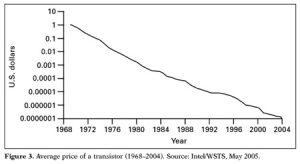 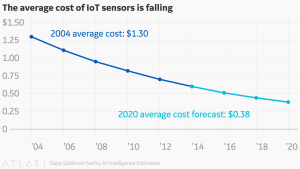 The current market state of IoT is intriguing. It has come along way since conceptualization in 1985. People around the world are investing in this technology more and more every day. From consumers, to educators, to businesses… all kinds of people want a piece of IoT. Whether someone is looking to optimize their manufacturing processes, or simply change the temperature in their house, the Internet of Things is getting the job done… and it’s only getting better. Here is a look at where the market is now and where it will be in only a couple of years: 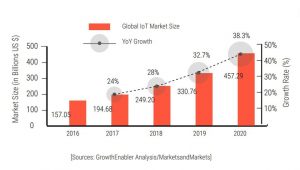 With a compound annual growth rate (CAGR) of 28.5%, thee global IoT market worth is expected to soar over the next two years. GrowthEnabler (UK) predicts that market size will increase by over $200 billion. As of now there seems to be no slowing down in this sector. 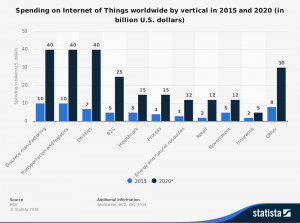 It comes as little surprise that manufacturing, transportation, and utilities sit atop this IoT spending forecast through 2020. The potential for IoT to assist in production monitoring, driving assistance, and public utility maintenance is huge. Having things like factory machines, cars, and electric grids connected to the internet will boost efficiency across society.

*All of this is great, but do not sleep on the growth in business-to-consumer (B2C) IoT spending. Consumers have loved products like Alexa and Nest in their homes. Consumer product spending may be underestimated in here, and I am curious to see where we end up in two years.

Billions and Billions of IoT Devices on the Way 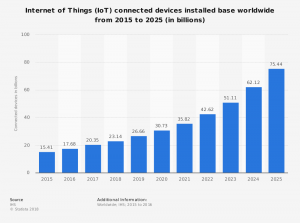 The IoT device count keeps growing because they save people time and money. In Industry 4.0, the replacement of workers with machinery has become more common. With proper hardware in place, it is possible to generate a higher yield with a smaller workforce. As consumers become more comfortable with this technology, they too will begin to simplify their daily lives with the addition of more home devices. The market must meet increasing consumer demands when the time comes.

The Internet of Things Will Be a Net Creator of Jobs 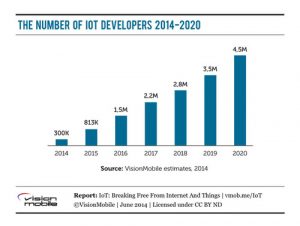 The Internet of Things will be benefit economies in both product and job creation. With the advancement of IoT, some jobs will be lost early on, however, new professions will be generated and . This newer field of technology warrants new business strategy, developer skills, IT monitoring, and more. Positions will be created to manage new industry problems that develop in the near future. Professionals of various skill sets will likely transition to newer IoT-based positions in hopes of a pay raise in this lucrative market.

The Internet of Things has Revolutionized the Human Experience

That concludes our overview of  the Internet of Things. Take some time now to learn about the developing technology, and consider ways you can automate current bothersome tasks. It is going nowhere, so the more you understand it, the more prepared you will be when IoT becomes a rather explicit part of life. You may even find a solution that will change the lives of others for the better 🙂

Alarm optimization – what SIGNL4 has to offer

Is being on-call a reason to quit?

Derdack® is a long-standing innovator for enterprise-class mobile alerting and alert management solutions. Our global customer list includes The Boeing Company, Daimler, BMW, Porsche and many other leading brands. With SIGNL4® we have reinvented mobile alerting and alert management for operations teams in IT, IoT, Industry 4.0 and other areas where swift response to critical events matters.